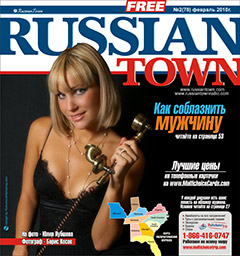 RussianTown is a Russian-language magazine published in Atlanta since 2003. RussianTown is the only magazine for Russian-Americans distributed free of charge throughout the Southeastern United States. The latest issues can be found in cities of Georgia, Florida, North Carolina, South Carolina, Virginia, Tennessee, Alabama, and Kentucky.

How our magazine will be useful to you?

RussianTown is a way for you to get in contact with Russian-speaking Americans, which is a target audience with high purchasing power. You will be able to advertise your products and services on the pages of our magazine and, as a result, will make attractive offers to the hundreds of thousands of our subscribers.

Today, Russian-speaking Americans represent an important and a sizeable segment of society (more than 4 million people), whose interests are not fully covered, and in some ways even ignored. Therefore you have a real and a fantastic opportunity to genuinely win the loyalty of these people, providing them with your quality products and services. In order to reach them you can, once again, use the help of RussianTown magazine, so popular in the Southeastern U.S. This is how our magazine will be useful to you.

Why placing your advertisement in RussianTown is so important?

Let's look at your gains in figures. There are over 70,000 Russian-speaking people in Atlanta alone and this number is increasing every day. And if we look at the entire Southeastern United States, we get even more impressive numbers: about 250,000 Russian-speaking inhabitants. Interests of so many people can and should be taken into account. It is worth fighting for their loyalty and one’s marketing campaign should be geared towards them.

We should add that RussianTown is distributed absolutely free of charge, so it is always available to its regular readers. There is no reason to part with the magazine for anyone, so by placing

your ad with us, you can be confident that it will be seen by the members of your target audience. Messages always reach interested people. So go ahead and establish the contact with a large Russian-speaking population of the United States and you will find loyal customers among many of them.

Why do magazine readers choose RussianTown?

Each issue of the publication covers a wide variety of relevant topics: there are articles about politics, science, art, history, sports, health, relationships and much more. Russian-speaking Americans like to get interesting and current information from a single source and in their own language, and we are pleased to provide them with this opportunity. For several years now RussianTown Magazine has been published in an electronic format (our official site has an archive of all issues to date), and today it is available for owners of mobile devices as well. Readers to this day rank RussianTown first among publications of its kind, and we thank them very much for that!

Advertising with RussianTown Magazine is your way to attract the attention of a specifically targeted audience consisting of hundreds of thousands of Russian-speaking Americans in the Southeastern United States.