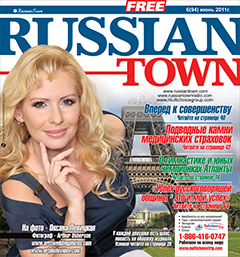 The Russian-speaking population of metro Atlanta and the states of Georgia, North Carolina, South Carolina as well as the entire Southeastern region of the United States is the target audience that is worth taking into consideration when advertise your business.

It's simple: if a person likes a particular product, service or brand, he or she will retain loyalty to it for a long time. Such is the mentality of immigrants from countries of the former USSR. If you interest members of this audience, they will become your customers. And, most importantly, they will remain your loyal customers for a long time.

RussianTown magazine interacts directly with Russian-speaking Americans in Atlanta and across the Southeastern United States: states of Georgia, Florida, North Carolina, South Carolina, Kentucky, Alabama, Tennessee, and Virginia. You can directly advertise and reach out to people from the pages of our publication and make your proposal. Your advertisement on the pages of RussianTown magazine is your connection with more than 250,000 loyal readers. A quarter of a million people are waiting to like your products and services!
RussianTown magazine is distributed free of charge and features content relevant for Russian-Americans today.

• RussianTown magazine has been and will always be interesting to our readers. They are used to the magazine and love to read it.
• You can be assured that your ad will be seen and will be valued by tens of thousands of people.
• Our magazine is actively distributed in high traffic locations such as grocery stores, law offices, medical facilities, colleges and other places targeted towards reaching the Russian-American community.
• The number of distributors of the print copies of RussianTown is growing every day.

The printed version of the magazine is without a doubt a powerful advertising tool, but we are not stopping here. In addition to your display advertisement in the magazine, we will publish it in the electronic version of RussianTown on the website www.RussianTown.com. This will allow members of your target audience to view your ad not only when a new issue is released, but anytime that’s good for them. Besides, the electronic version of RussianTown may be conveniently browsed on a smartphone, laptop, tablet or any other mobile device. All these modern features are implemented both for readers and you so that you can have effective interaction with them.

Our readers also have the option to download the electronic version of each issue of the magazine in the PDF format from Joomag. As a result, your advertisement that was published once can work for you and can attract customers for several months and even years after. RussianTown is published since 2003 and time has shown that it is always interesting to people. Rest 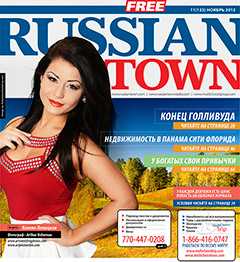 assured, our readers will want to read the magazine and view your ads!

What are you waiting for or advertising by the numbers

We have 250,000 potential Russian-speaking readers and we should also add we have more than 3,000 daily visitors to our website. So the electronic version of the latest issue of RussianTown will have about 90,000 views within a month. If we add the numbers, the result is - your possibility to attract attention of a member of your target audience to your advertisement 340,000 times! And what’s more, each issue will be read even after the next issue is released! Your chances of getting customer loyalty with our magazine are great and will only grow.

There are 2 more powerful prerequisites to your success:

As a result, advertising with RussianTown magazine becomes very effective and works a long time to make your business successful. This fact has been proven and confirmed by Russian-speaking Americans living in the Southeastern United States.

Obtaining new customers and increasing loyalty of repeat customers is of course great, but can I get some additional benefits by regularly publishing advertisements in your magazine?

To receive bonus offers you only need to become our partner. If you sign a contract to feature your advertisement in the magazine for at least 6 consecutive issues (i.e., for a period of 6 months or longer), you will receive the following bonuses:

• Your advertisement will be placed free of charge on the main page of the RussianTown.com portal as well as all portals of RussianTownUSA.com network. We will place your company name in the list of advertisers, and when people click on it, they will see your ad exactly as it appears in the printed version of the magazine.
• Your advertisement on our Facebook page. We have thousands of friends in social networks and this number is increasing every day. All our friends and followers will see your offer and will 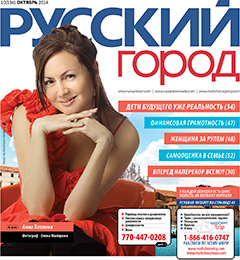 loyally accept it. Free social media marketing (SMM) promotion is a great addition to your advertising campaign.
• Free advertising on mobile applications RussianTown for iPhone, Android, and iPad. The owners of smartphones and tablets which are so popular today will be able to see your advertisement in the convenient for them format anywhere and anytime that is good for them. Get closer to your customers using mobile technologies.
• Your advertisement in a video format on the official RussianTown YouTube channel. People spend hours every day watching all sorts of videos that contain information interesting to them and so increase their trust. Youtube will deliver your offer to every fan of such videos.

Russian-speaking Americans in the Southeastern United States are ready to welcome your advertisements with a positive view. Due to the uniqueness of its mentality, this target audience is seeking to find the best products and services and will remain faithful to their choice for a long time.

Sign a contract with RussianTown magazine for a period of 6 months (issues) and take advantage of all of these useful bonus offers! Then money spent on your advertising budget will work for you in several ways, promoting your brand and attracting new customers. Russian advertising in Georgia, Florida, South Carolina, North Carolina, Alabama and Tennesse will work for you!